Do you have a little one who loves Elena of Avalor? See how I made this DIY Elena of Avalor costume for Halloween – it’s even easy enough for beginner sewers (like me!). 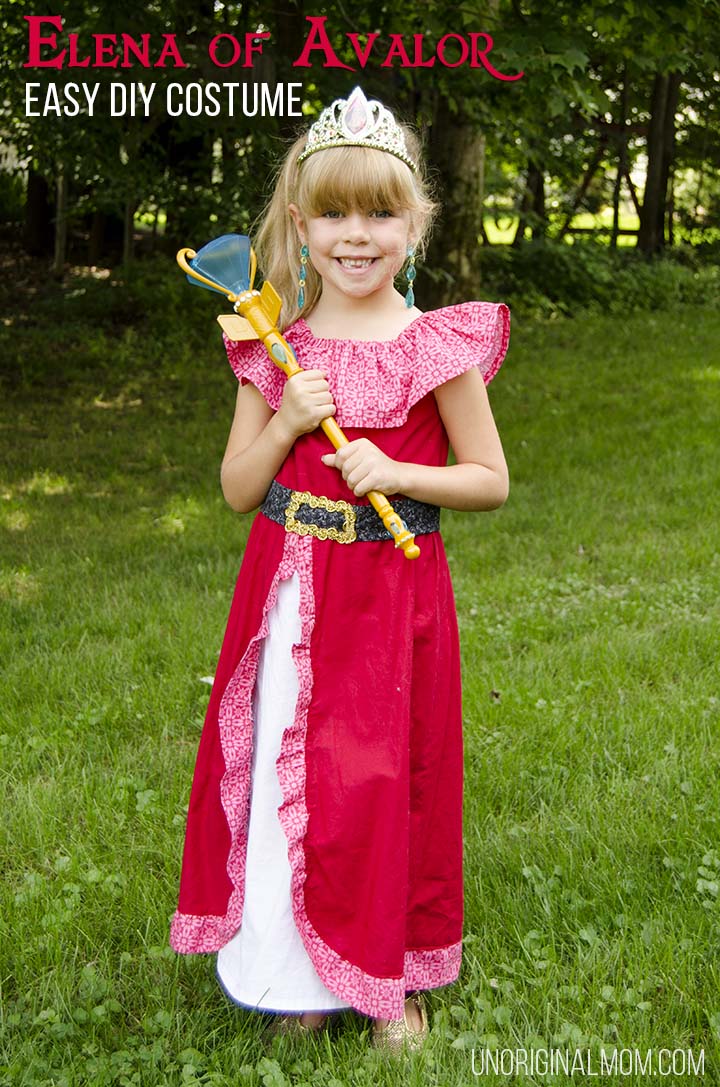 Since beginning this little blog over five (!) years ago, it’s become a tradition of sorts to share my daughter’s Halloween costume the day after Halloween. I know that’s not very helpful for anyone, but it’s a purely selfish motive – I just love being able to go back and look at these pictures each year!  Well, this DIY Elena of Avalor costume is actually LAST year’s Halloween costume, but I ended up breaking my foot two days before Halloween last year – so the photos and write-up for a blog post on this costume just didn’t happen.  I was sad to miss posting about it though (and sad to miss having the pictures to look back on), so I decided to have her dig out her costume again for some photos. It actually works out a bit in your favor, though, since this time you actually have some time to make this costume *before* Halloween, if you’d like to!

My daughter has been very into Elena of Avalor since she first appeared on the Disney Channel two years ago. Elena is a new hispanic Disney princess with an animated TV show – it’s all about how this teen princess saved her magical kingdom of Avalor from an evil sorceress and must now learn to rule as its crowned princess. I’ll admit, it’s a fun show with lots of great music and good lessons, so I’m mostly okay with this obsession.  ;-)

We took a Disney trip last fall and meeting Elena was my daughter’s favorite part! (In fact, I made her this Elena of Avalor shirt and shared it as a free cut file, so if you have a little Elena fan in your life you’ll want to grab that!) 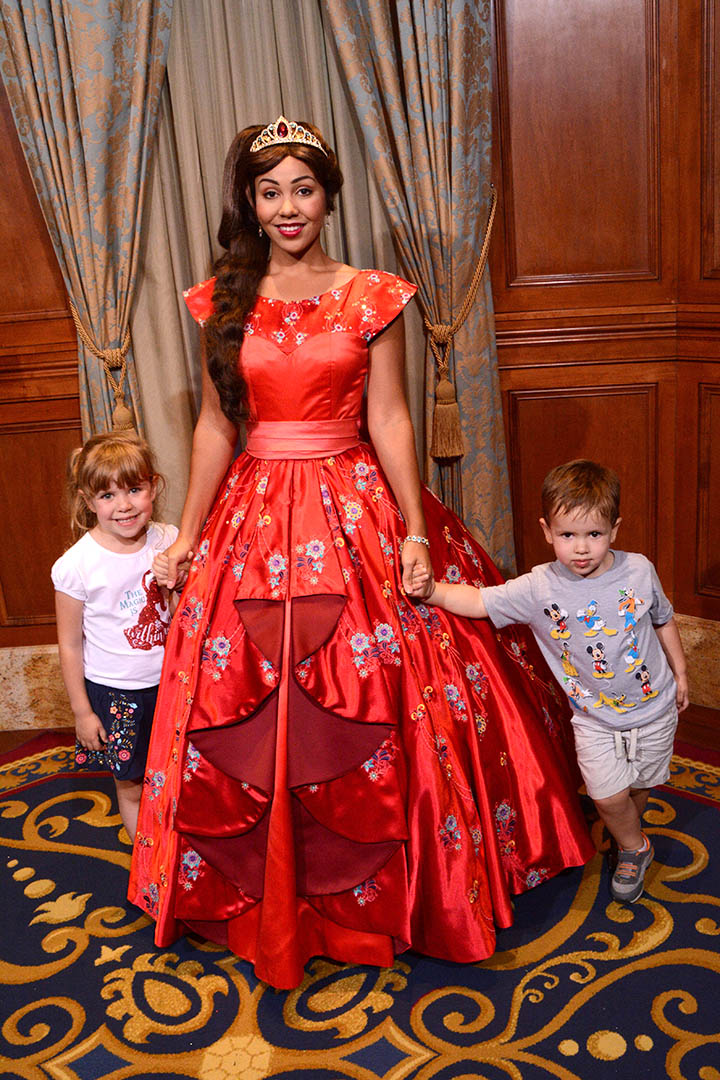 She told me over the summer that she wanted to be Elena of Avalor for Halloween and never once wavered in her decision, so I started searching for a dress pattern. There aren’t too many options out for a DIY Elena of Avalor costume there since Elena is such a new princess, and while I did find a Simplicity pattern (which I didn’t love), I ended up following this tutorial and pattern from Striped Swallow. It’s a mash-up of two patterns and involves a bit of modification to the patterns, but it worked out really well! The only thing I did differently is to offset the front ruffle and slit to the side, since that’s how Elena’s dress looks. There are two panels that make the front of the overskirt, and to offset the slit I had to make one a little bit wider and one a little bit narrower. Other than that, I followed Mandalynn’s instructions! 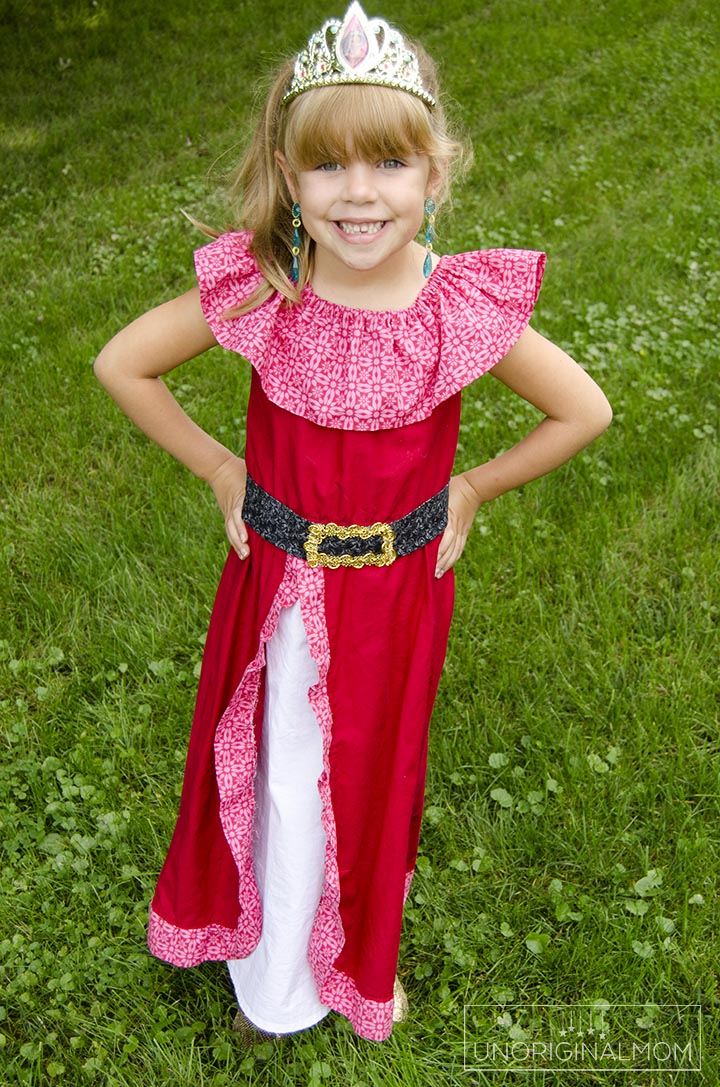 Now, I am NO seamstress…in fact, beyond quick little projects here and there I typically only use my sewing machine for Halloween costumes. But this pattern was easy to follow and I whipped this dress up in just two afternoons. If I can do it, you can too! 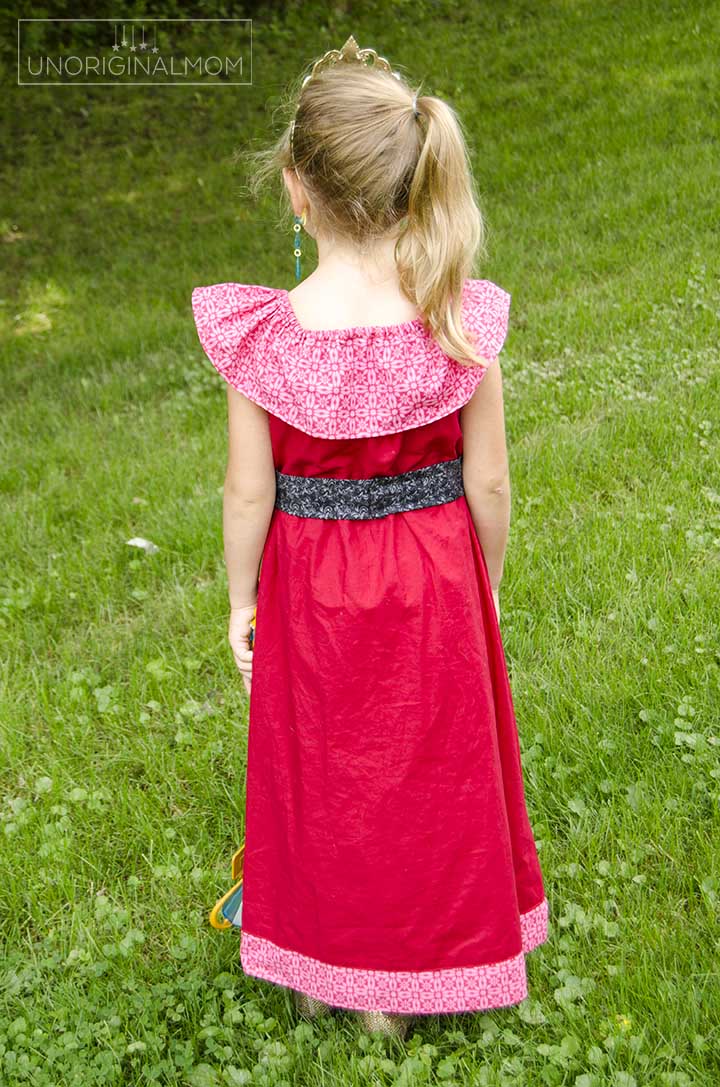 Since I only paid for the pattern and the fabric (which was inexpensive to begin with, but of course I used a coupon!) I felt justified in buying a few accessories for her DIY Elena of Avalor costume that I knew my daughter would love. Plus she loves to play dress up, so I know these will be getting LOTS of use in play time too. We already had an Elena crown that was given to her as a birthday gift, so I got her these shoes and this scepter (they were on sale for $9.99 each from the Disney Store!) to use as costume props. (Also, since these photos were actually taken well *after* Halloween for the sake of this blog post, she’s wearing this crown and earring set that she got for Christmas last year.) 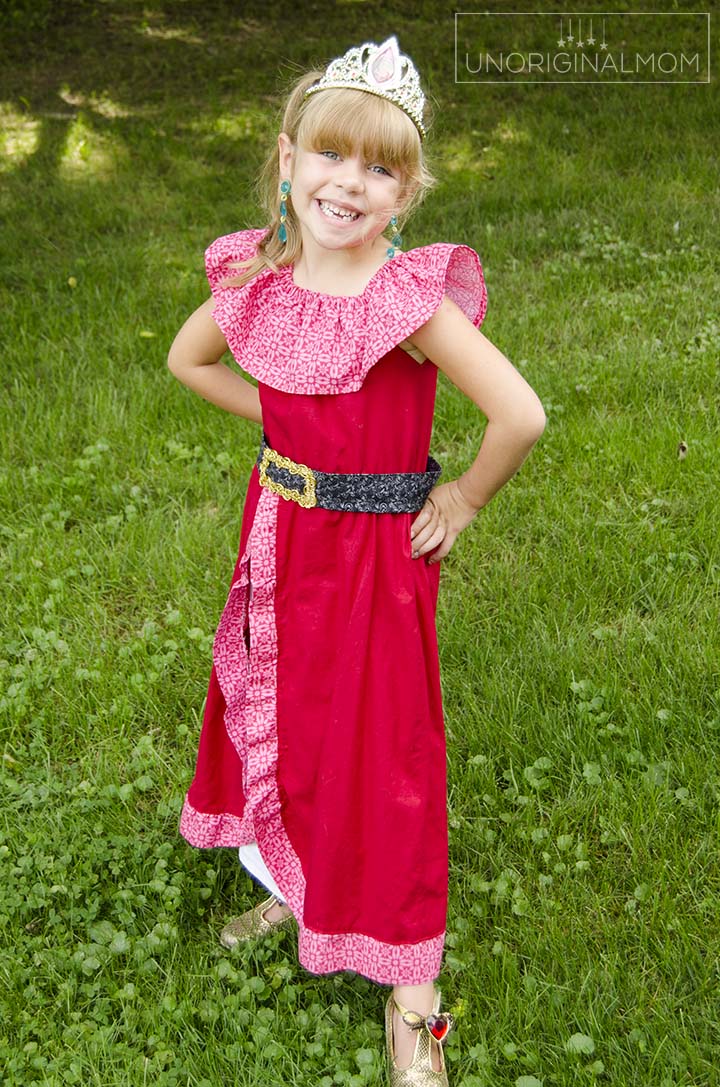 I also used some leftover fabric to whip up a little tote bag for her to use to collect candy. (I followed this tutorial to make mine.) Then used some glitter heat transfer vinyl to add a silhouette of Elena on the front of the bag. 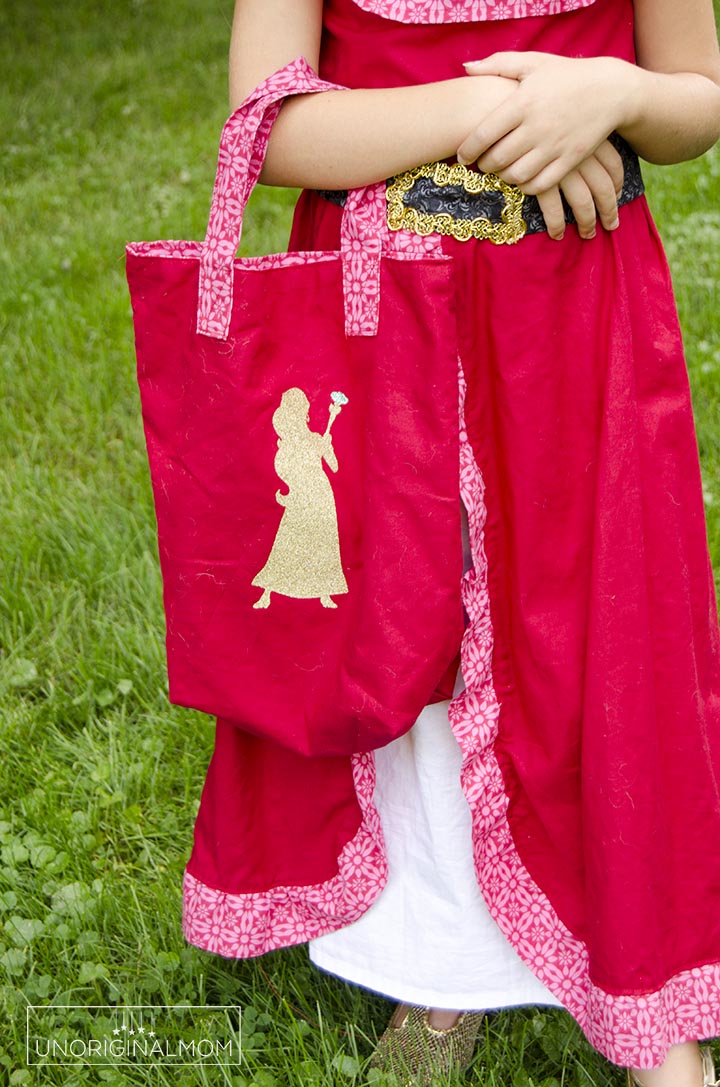 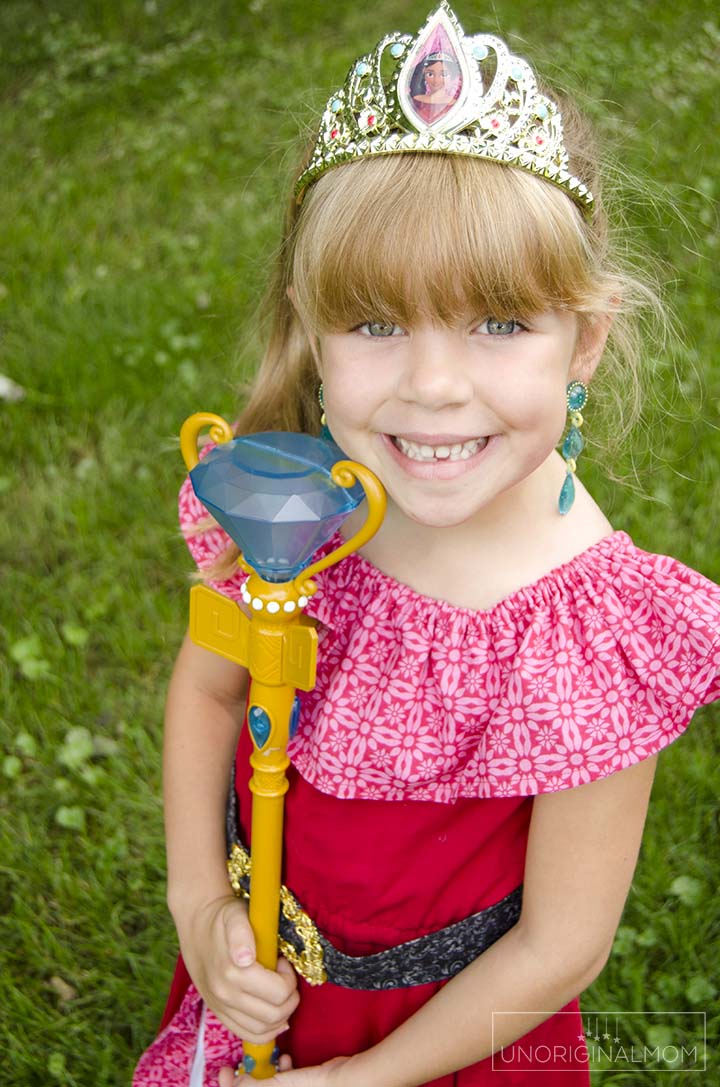 If you’d like to take a walk down memory lane with me, here’s the history of Addy’s DIY Halloween costumes…

(My poor second child has only ever had one semi-handmade costume – when he was Flounder to my daughter’s Little Mermaid. Other than that he’s gotten stuck with store bought ones. #secondchild #noshameinstorebought)

Good luck with whatever kind of Halloween costume you’re pulling together for your kiddos this year…whether it’s store bought, handmade, or something in between!

One Response to DIY Elena of Avalor Costume